On October 21, 2019, in connection with the 30th anniversary of the adoption of the law “On the state language”of the Republic of Uzbekistan on October 21, in the abonement sector of the Regional Information Library Center named after Ahmad Fergani, a book exhibition named “state language and self-awareness” was organized. Established exhibition was commented by sector librarian M. Mamadalieva.

The Uzbek language is the native language of the Uzbek people, the absolute majority of the population of the Republic of Uzbekistan. It is an important factor of the unity and integrity of Uzbekistan, the chipset of society. It is an important task to ensure the comprehensive development of the Uzbek language, being a means of expressing the Uzbek people, its national culture and originality, and to consistently and fully realize the potential of this language as a state language. 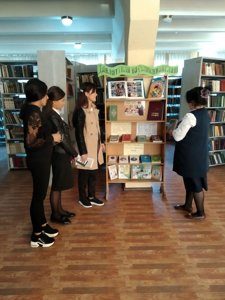